Would you like to switch to the accessible version of this site?

Don't need the accessible version of this site?

How I Got Into Chiropractic

This is the question that was answered early in my life.My father, Stan, started going to Dr. Billmyre in Xenia, Ohio, when he was involved in an automobile accident.He hurt his neck and lower back.Shortly after starting his adjustments, Stan and Jan had their third child Scott.

Within a few months, Scott got really sick.He developed a serious respiratory disease and pneumonia.Medical treatment (antibiotics and drugs) had failed and my parents were instructed to call the Priest and have the last rites performed.The Doctors did not think that Little Scooter would make it.That night my parents were praying and hoping for the best.

When my parents took Scott home, the night was unknown.My father had a severe migraine that evening and decided to go to Dr. Billmyre.Dr. Billmyre knew that something else was upsetting Stan.He asked and my dad told him that Scott was going to die.He said why don't you bring him in and let me check his spine. He said, "Why would you adjust a baby who is 3 months old.Isn't his spine too delicate?You're a neck and back Doctor."He finally agreed and brought Scott to him. 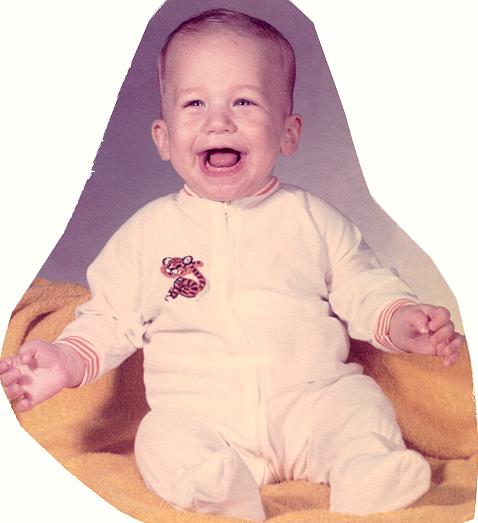 While he was checking his spine, he placed his finger on the right side of his neck and he started giggling.He then placed his finger on the left side of his neck and Scott started screaming.Dr. Billmyre said that this place was where his neck was misaligned during the birth process. He made an adjustment and immediately Scott projectile vomited and went to the bathroom.The fever, which had been there for the last month, was gone.My father could not believe the miracle that just occurred.Dr. Billmyre said with that adjustment, his little body's ability to be healthy was restored.He stated that his Innate God-given-force was released and expressed.

Stan was told to monitor him through the night and that Dr. Billmyre would be at the house in the morning for breakfast to check his spine again.The next day, Scooter slept through the entire night without waking up with a cough or fever.Dr. Billmyre checked his spine and adjusted him again.From that moment on, Scott never had that problem again.

In 1989, Big Scooter (he wasn't little any more) was the starting fullback for Moeller High School.This picture is of Scott when he was 4 months old. Since that point in our family's life, we all drove to Dr. Billmyre's office in Xenia for regular maintenance adjustments and to stay healthy.That one night, changed the course of my life and growing up happy and healthy is what I know.That one adjustment allowed me to have and experience having a brother for the last 38 years.

I am thankful for Chiropractic care.If Dr. Billmyre had not have told my father to bring Scott into the office, he would not be here today.Now you know how I got into Chiropractic.I look forward to seeing you and your family.